This Saturday, July 27, I'll be taking part in a lovely little music festival in Hillsborough, New Brunswick. It's called The Bore Music Festival, named after the tidal bore in the Bay of Fundy. You can read more on the festival website, or their Facebook page. I'm on at 7:15 pm, but there's great music all afternoon and evening. Plus, this guy might be the MC:

This Thursday, I'm playing a casual show at Local Jo cafe in Halifax. It'll be a chance to try out some new songs, and hopefully eat some treats. Matt Reid is playing, too, and I've heard that his new songs are awesome. Come hang out with us and hear some piano pop! 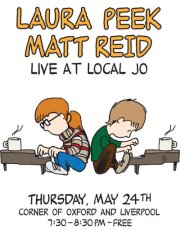 Happy new year, everyone. I have a cold but hopefully that means I'm just getting all the illnesses of 2012 out of the way in one dose, right?

I am delighted to announce an upcoming show with The Heavy Blinkers in Halifax. It's happening on January 21 at The Company House on Gottingen Street. I'll be playing solo, and hopefully doing a couple of new songs (fingers crossed).

I'll also be playing flute with my buddy Adam Mowery at Gus's Pub on January 20. Expect some scrappy pop magic.

Finally, here is a photo taken by Kyle Cunjak, one of the nicest and most multi-talented people I know. This was during the summer in Point Pleasant Park for Will Robinson's Parchetypes project. 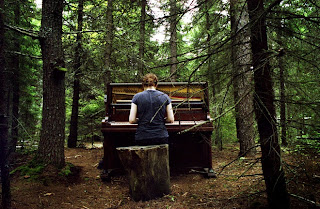 At long last: an update!

I will be playing at the Company House in Halifax, this Wednesday night. Also on the bill are Penny Blacks and Adam Mowery. I've known Adam since I was in a band called the Maughams and he was in the Port City Allstars. I don't want to think about how much time has passed since then. Oh wasted youth! It seems like only yesterday I was wearing a mask of Mao Tse Tung and doing a choreographed dance to Herb Alpert and the Tijuana Brass.

I had a lovely time in Yarmouth, NS, during Nova Scotia Music Week. It was fun to be in a small place with a tonne of other musicians. I ate lots of trail mix and even watched some Mantracker in the hotel. Although I didn't win any awards, I feel like I won some friends. Or something. Anyway, I'm glad I know so many great people.
Posted by peek at 8:50 PM No comments:

Hello friends, I hope summer has been treating you well.

I have a couple of exciting little performances coming up very soon in Halifax.

On Friday, August 19, I will be participating in a unique art project in Point Pleasant Park.  Essentially, I will be playing an old upright piano in the woods for anyone who cares to listen (or stroll by angrily).  I'll be there from 11 am to 1 pm, playing a mixture of original songs and songs from the days of old.  Check out the Parchetypes site for more information.  This project is the brainchild of local cool dude Will Robinson.

On Saturday, August 21, it's the Incredible Picnic, a celebration of local food.  I will be doing a show on the Halifax waterfront sometime between noon and 2:00 pm.  The Picnic is always a fun family time where you can eat lots of goodies and feel good about yourself for supporting farmers.

Oh, and one more thing: I will be playing a showcase at Molson Canadian Nova Scotia Music Week 2011 in Yarmouth.  I have never been there before, so I'm very curious about the town.  My show is on Saturday, November 5 in a place called Rudder's, at 5:00 pm.  I expect to serenade patrons as they wolf down seafood dinners.

Hello hello, I am back in Halifax, sitting at work in between phone calls for Travis Tritt tickets (I work in a box office).  I had such a nice time on my tour.  Here are the obligatory pet photos to round out my collection; these beauties belong to my mom.
Here's Pitseleh, the troublemaker: 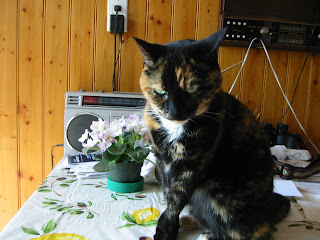 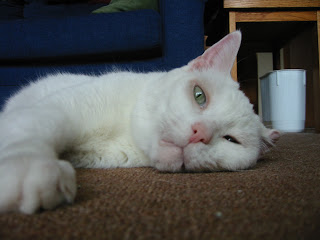 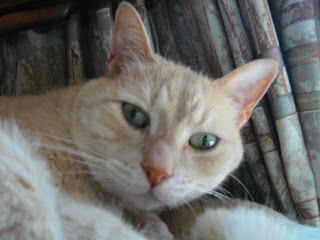 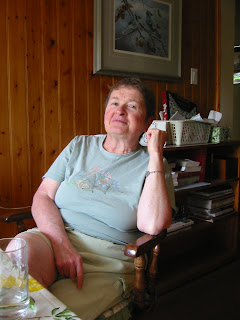 The Toronto show at the Horseshoe was a bit strange because I was on so early, but I had a good time nonetheless.  There was a nice mixture of old and new friends in attendance.  Playing in Toronto always feels like worlds colliding for me.
After I played, there was a stoner rock band from Baltimore.  They were super loud, but good at what they were doing.  Some friend of theirs kept harassing me and my friend for not dancing with him, claiming we were being "typical Torontonians."  He had the nerve to say that he had "supported" me by listening to my songs, so I was obligated to support his buddies by dancing.  His dancing style, by the way, involved lots of flailing about like he was at a rave.  It was ridiculous.
I went out for drinks with my pals Brent and Carly and got all caught up.  I was lucky to see so many friends and family members on this tour.  You guys rule!
That's all for now.  Thanks to everyone who gave me a drive, came to a show, gave me a place to stay, and otherwise helped me out.
Posted by peek at 4:10 PM No comments:

I am at my mom's house in Scarborough, where I grew up.  I was super lazy today and it felt great!

Here's what happened since my last update.  We stayed with a really fun couple in Quebec, just across from Ottawa.  Jenn and Jamie are party animals with a beautiful house and two overly-loving cat brothers. 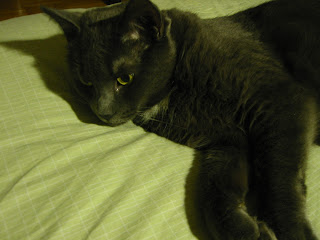 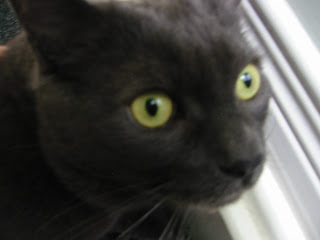 We had a lovely breakfast, and then took a creepy group photo on their back deck.
Left to right that's me, Jamie, Laura and Paul (Dog is Blue), all touching Jenn, who was a good sport. 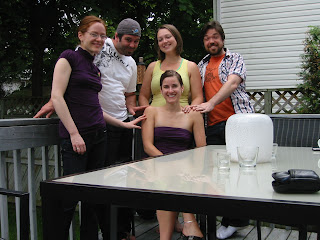 After the long drive back to Toronto, I was dropped off at my mom's place in Scarborough.  I got to see some of my favourite ladies, Highland Creekers I've known since grade school.  We sat around and chatted all afternoon.  It's always so grounding to hang out with people I've known for so long.
Posted by peek at 10:48 PM No comments: